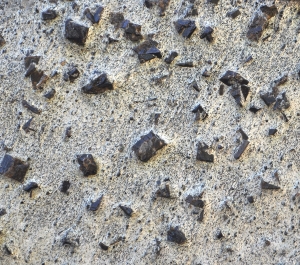 The department maintains collections of more than 2,000 mineral specimens, 2,000 fossil specimens, 4,500 rock specimens, and 2,000 topographic and geological maps. Specimens were collected from sites all over the world, including Antarctica.

This facility also houses our historical collection of maps and notes from our Department's founding member, Dr. Irv Tesmer.

There are 78 separate rock and fossil collections.

An inventory of minerals and maps will be added upon its completion.

For access to the Collections, email the Department (solargs@buffalostate.edu).

The Geochemistry and Hydrogeology Laboratory (SAMC 57) is used for research, and classes in geochemistry and hydrogeology such as GES 350 - Environmental Geochemistry, and GES 460 - Applied Environmental Methods. The lab houses a Rame Hart Goniometer, an SRI Gassless Educational Gas Chromatograph and an Orion 210A Portable pH/ISE meter. Faculty and students make regular use of a Hach CEL/850 Environmental Water Quality Lab kit, including a digital titrator and a colorimeter. The lab also has a Hach 2100P Portable Turbidimeter. 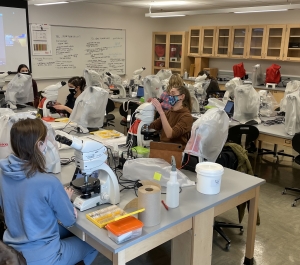 The Microscopy Lab (SAMC 114) is an interdisciplinary lab for geology and chemistry that includes twenty-four student stations each with a dedicated petrographic microscope equipped with a digital camera. Twelve stereo microscopes with blackfield capabilities are also available. For teaching and research there are two research-grade versions of these microscopes, each equipped with dedicated high-definition digital cameras. Petrographic microscopes are compound polarizing microscopes that filter light rays to enable examination of minerals and textures in thin slices of rock (thin sections) at magnifications ranging from 40x to 400x for the student scopes and a combined 7x to 1000x for the teaching/research scopes. Eight of the 24 student scope cameras are Wi-Fi, part of the ongoing project of equipping the lab fully for Wi-Fi teaching. 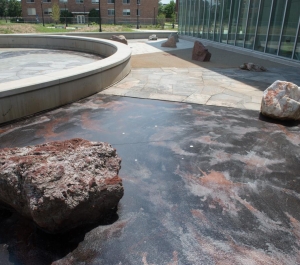 Buffalo State's Outdoor Geology Classroom provides an immersive field-like experience where students and visitors learn about Earth processes using a purposely arranged combination of natural and construction materials to represent the components and processes of the Rock Cycle. 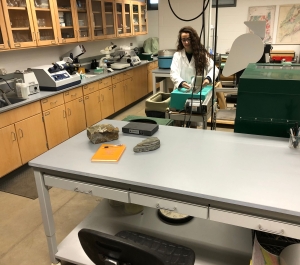 The Rock Preparation Lab (SAMC 55) is used for faculty and student research where rock, mineral, and fossil sample processing is necessary. The lab is furnished with all equipment necessary for rock and mineral sample handling, and for teaching of the associated techniques for mineral separates analysis, petrography, and SEM analyses.

The lab features a 24" slab saw, a trim saw, and a precision saw, and several polishing options including a Logitech (UK) automatic polisher, two polishing wheels (10" and 18"), and a vibratory polisher. The lab has an integrated Retsch jaw crusher and disk mill for sample reduction, a sandbox for sample reorientation, and a Frantz model L-1 magnetic separator.  For thin-sectioning, the lab houses a Buehler Petrothin thin-sectioning machine, glass polishing plates, and an epoxy station. On hand is a research-grade petrographic microscope and two hand-specimen microscopes. The lab houses a Comco Microblaster for sample cleaning. 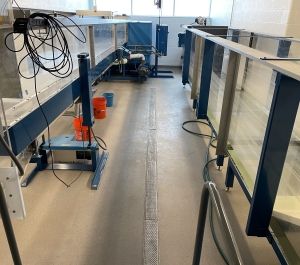 The sedimentology lab houses a variety of demonstration equipment used in courses such as GES 300: Sedimentology; GES 315: Marine Environments; and GES 224: Geological Hazards. The wave tank and recirculating flume, described in greater detail below, were designed and constructed by students enrolled in a senior engineering design course. Other equipment in the lab include: a Hydrobotics ROV (remotely operated vehicle), Micromeritics SediGraph 5100, Marsh-McBirney portable current meter, Sieve shaker, and a Sequoia-Turner spectrophotometer.

Wave Tank
The wave tank is 24' long, 3'10" high, and 4' wide. It was recently extended from 16' to 24'. The tank walls are 1" Plexiglas and are supported within a welded and powder coated steel frame. The frame is supported on 1" plywood resting on a stand. Adjustable feet on the stand allow the frame and tank to be leveled on the floor. Waves are generated by an oscillating paddle mounted at one end of the wave tank. One of the benefits of this unusual and unique design is that the wave tank can be repaired and/or lengthened without breaking a permanent plastic bond because each wall of the tank can be removed by unbolting the section.

Recirculating Flume
The original flume was built in 1987 by two undergraduates. Water recirculated through the 20' long flume and velocities were controlled by two butterfly valves connected to PVC pipes and the 7.5 hp pump. Over the years, leaks developed between the joined sections of Plexiglas, but other than the leaks, the operation of the flume was trouble-free. Rather than start again, it made more sense to rebuild the flume. This opportunity also allowed us to make some minor design changes. Largely based on the success of the collaborative effort that resulted in the wave tank, the rebuilding of the flume was undertaken by three students enrolled in the capstone engineering course. The students removed the Plexiglas and some of the old PVC pipes. The support platform was then modified to accommodate the slightly modified new tank, frame, and piping. A new valve mechanism was also installed to facilitate draining and cleaning of the flume.

One of the students' favorite demonstrations involves pouring gallons of milk down the flume to model turbidity currents. 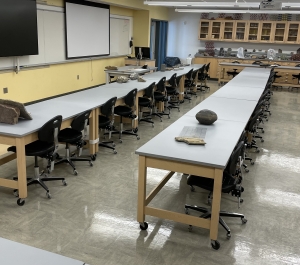 Our Teaching Preparation Lab (SAMC 105) has thousands of binned teaching specimens, and hundreds of maps for labs. The department has three dedicated teaching labs in SAMC (57, 106, 115). Classrooms 106 and 115 are identical, and feature flexible seating/table configurations, and were designed for map and specimen examination including a digital teaching microscope and five hand-specimen microscopes. Room 57 is the dedicated "wet" teaching lab (The Geochemistry and Hydrogeology Lab). 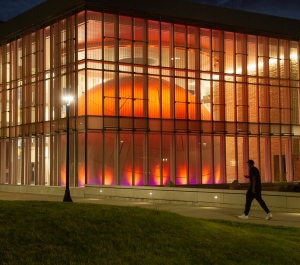 The Whitworth Ferguson Planetarium provides students and visitors with viewings of stars, constellations, nebulae, galaxies, planets, and much more.

Located in the atrium of the Science and Mathematics Complex, the planetarium offers seasonal shows open to the campus community and the general public.

The PANalytical X'pert MPD X-ray Diffractometer is used extensively in our Forensic Geosciences course. It has the following basic configuration and capabilities: